Professor of Physics Victor J. Stenger has constantly disputed against such notions as God and consciousness associated with a kind of a bioenergetic field, which however, deeper and deeper penetrates into modern health systems. Prof. Stenger regularly publishes his views, which state about scientific rejection of spurious concepts of God and biofields. Stenger notes [1]: “If bioenergetic fields exist, then some 200 years of physics, chemistry, and biology has to be reevaluated… Much of alternative medicine is based on claims that violate well-established scientific principles.”

In December of 2007 the book by Victor J. Stenger appeared, God: The failed hypothesis. How science shows that God does not exist (Prometheus Books, Amherst, New York 2007), his views also are presented in his web site http://www.colorado.edu/philosophy/vstenger/. He, as a conventional physicist, claimes: “Holistic bioenergetic fields are figments of the imagination” http://www.csicop.org/sb/9806/reality-check.html.  He considers alternative therapies as non-scientific, which are based on an idea of biological fields, as inimical to health care systems, albeit notes that alternative field therapies become increasingly popular.

Since the majority of leading scientists in the world share views similar to Prof. Stenger’s, I decided to write this open letter.

Have you ever read the book: Masaru Emoto, The secret life of water (Beyond Word Publishing Inc. and Simon and Schuster Inc., 2005)? Experimental data available in Emoto’s book show that your materialistic views on the real Nature are completely wrong. In particular, from Emoto’s pictures you can see how consciousness directly influences the formation of matter (there are many photos of a number of different fractals that were creating under a prayer).

All the history of world civilization, which started around 8000 years ago from the civilization of Aratta, has showed that the first civilization was strongly spiritual and their community represented a primary commune that did not know any slaves. Aratta was existent for 3000 years without any intestine wars. Aratta’s brachmans who guided the civilization were masters of bioenergetic fields. Only later when other countries ( and others, which descended from Aratta) were developing their own order, senior warriors – kshatries – became to rule there over instead of brachmans. Gradually those new slave-owning systems were transformed to feudal and capitalist ones whose “gods” became pure material. Especially, the major influence to a highly materialized life, primary material welfare, introduced the religion of Judaism. It is based on the existence of rich owners and destitute slaves.

If we wish to improve our present world, we must change the religion base and, hence, come back to an idea of an informational field that governs the world. Modern religions – Judaism, Christianity and Islam – are against the natural harmony, they support an idea of slaves and the rich, that is, contradictory classes. However, such assignment cannot give any harmonization. The existence of Aratta was discovered only 15 years ago. It was located exactly in the land of modern . The major discoverer of Arrata, which initially was known (since the 1890s years) as the Trypillia culture, is Dr. Yuri Shilov, a great Ukrainian archaeologist, historian and ethnographer in one person. The population of Aratta did not disappeared, today they are Ukrainians (who in particular in the past founded the England kingdom and the Scotch; Indian tribes of Comanchi in the South America and Indians of Haitii also derive themselves from the south part of Ukraine [2], etc.). Dr. Shilov [3] came to an idea of informational field, as God, who has to come back to change the existent discrepant world. And he sees that it is that must give a powerful incentive to such development of events.

Very close to these views is American archaeologist Stephen Mehler [4], who could reveal an actual prehistory of very ancient Egypt, which showed that their prehistory was not class straggled but communal and the immateriality was their basic form of existence.

From the pure physical point of view, the informational field is a substructure of the matter waves of conventional quantum mechanics. However, orthodox quantum mechanics is constructed in an abstract phase space. It operates with such abstract things, as the psi-wave function. An overlapping of psi-functions means the interaction of appropriate quantum objects. Quantum mechanics is a strongly probabilistic discipline. The majority of physicists is still treated the universe as the inflationary big-bang model in which matter is expanded after a conjectural primordial explosion (but why did a first very small bunch of pre-matter explode? It seems it was impossible without attraction of God…).

Contrary to the dominant views, Bounias and Krasnoholovets [5] starting from a pure mathematical analysis suggested a complete new approach to the fundamentals. The approach allowed us to develop a detailed theory of the constitution of real space. The structure of space appears as a tessellation lattice of topological balls, primary cells of Nature. The new knowledge base of space discloses the origin of such fundamental physical notions, as space, particle, field, mass, gravitation, charge, spin, de Broglie wavelength, etc. The theory permits the existence of only two fundamental physical fields: the inerton field and the electromagnetic field. These fields have their origin in a tessellated space. The theory developed has proposed a submicroscopic deterministic mechanics of quantum objects, which can successfully supplement conventional probabilistic quantum mechanics developed in an abstract space. The inerton field (or mass field) mathematically is a field of local volumetric fractal deformations of the space lattice. The field obeys the laws of fractal geometry and that is why this field indeed is able to play the role of informational field in the sense discussed by spiritual people. More or less intensive inerton fields can change physical-chemical reactions giving rise to new chemicals. Inerton fields of a massive object appear as the object’s Newtonian gravitational field.

The inerton field is an omnipervasive field and, because of that, it can influence living creatures. The fractal nature of the field is able to superpose a memory of previous states, or ancestors, on a new generation of population. Since history of social development spires, we in fact may anticipate serious positive changes on the globe generated by , as it was that material and spiritual root of world civilization whose spirit might start to renew a positive transformation again (which is in line with the Vedic literature that also arouse in Aratta). Two first considerable steps in this directions has already made. These are the revelations of Dr. Shilov and Dr. Krasnoholovets.

Hundreds of years the humanity has been leading by class struggle, religions, arts, military power closely related with industrial lobbies and the globalization in the present time. We can see that all previous paradigms have exhausted their possibilities to reach a harmonious development. An alternative way should emerge, as predicted by the ancient pre-class Aratta civilization. Thus in line with studies of Shilov, Krasnoholovets and the authors of Manifesto of Scientists [6], science must now be prepared to impulse a paradigm of leading objectivity, and to share with its spiritual complementaries the task of offering to our Planet a new era of well-founded and authentic wisdom.

So, fundamental science shows that God of spirituality, i.e. the informational field, does exist and we must take it into account.

(b) Pre-History of Rous’. The cradle of civilization (Akademicheskiy proekt, Moscow, 1999); in Russian.

(b) From light into darkness. The evolution of religion in ancient (Adventures Unlimited Press, 2005).

[4]  See references about the research and papers of Michel Bounias and V. Krasnoholovets in http://inerton.org . 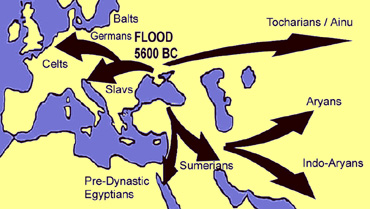 Arthur Kemp, March of the Titans. A History of the White Race